This project is for the birds. Really is. 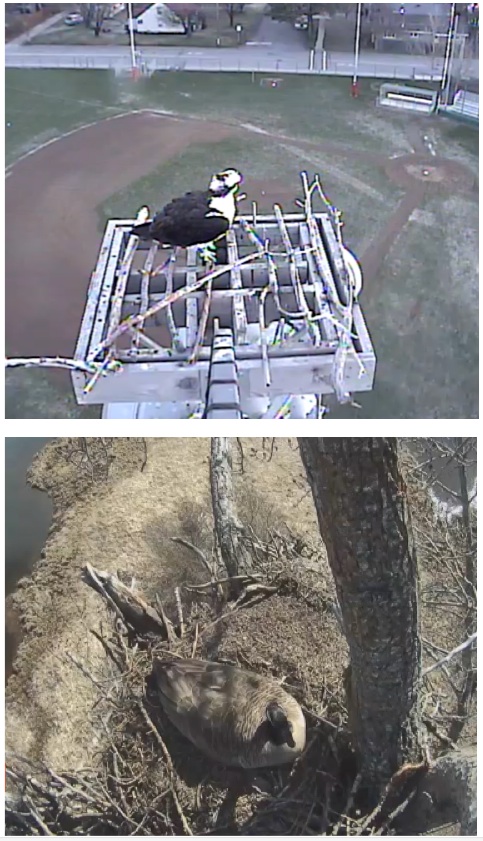 Top, the osprey checks the nest platform at Sandpoint’s Memorial Field; below, mother goose on her eggs in the eagle nest at Kootenai National Wildlife Refuge.

One of the “most fun” projects we have carried out with our own publications the last couple years has been the osprey and eagle cams we stream live onto our community portal website, SandpointOnline.com. Two years ago in partnership with the City of Sandpoint, Avista and Northland Communications we placed a web cam on an osprey nest at the Sandpoint Memorial Field; it proved immensely popular as people were able to watch the ospreys build their nest, lay two eggs and successfully hatch and rear one chick. Last year, however, the cam produced a surprise, as geese took over the nest and prevented the osprey from using it. The geese provided an interesting show of their own, including a dramatic scene when the baby goslings hatched and then had to leap down from the 100-foot-tall nest. Meantime, also last year we worked with the Friends of Kootenai National Wildlife Refuge to stream a cam they had placed on an eagle nest at the refuge, but again with an unexpected result; the eagles laid two eggs but neither hatched.

And the fact that the cams let us watch Nature unfold unpredictably – with seemingly no regard to good or sad outcome – is surely their attraction. We have both cams operating now for this spring and summer, and already the story is building at each nest. The first osprey arrived April 11, and found their nest has been reduced to sticks – rendering it unusable to the geese but now posing a rebuilding project for the ospreys. Meanwhile, at wildlife refuge, a pair of geese have taken over the eagles’ nest and are busily incubating several eggs. Now we get to see how these stories play out. Go watch them here:

Curious about what, exactly, it takes to put a camera in an eagle’s nest? Kintronics, the firm that provided the equipment, has an excellent story, well illustrated with photos, at the Kintronics Technology Notes blog»